Cycles is an underrated album of Frank Sinatra, released in 1968, by Reprise Records. The songs are arranged by Don Costa.

The songs in Cycles album are as following:

And here is a photo of my Cycles LP. 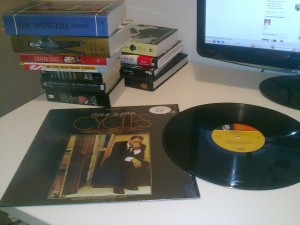 Among all albums of Frank Sinatra, Cycles is my favorite one. I really love all the songs in the album, except Moody River, which i believe is not a good song and a wrong choice for the album. All the other songs have a unique and beautiful side, and when combined with Frank Sinatra’s amazing voice in late 1960’s, the album simply becomes the best. It is not a concept album, and it can be listened any time of the day. You don’t need to be in the mood for it, just play and enjoy.

The song “cycles” is a masterpiece itself, both lyrics-wise and music-wise.
“Pretty colors” and “rain in my heart” are two of the best songs for a desperate and sad lover, and “Both Sides Wow” is successfully performed. Not better than Bing Crosby’s live performance maybe, but still very nice.

The Both Sides Now performance of Bing Crosby I have just mentioned can be found below.

Other than these, “little green apples” and “gentle on my mind” are not the best songs of their kinds, but Sinatra’s voice is enough to make them worth listening. Both very beautiful songs.
Lastly, “wandering” is a very unique and impressive song of the Cycles album.

Below is the song wandering from Cycles album.

Frank Sinatra´s Cycles album is in the shadow of his career, it is an unlit gem. But we can always reach for it and enjoy it.

I absolutely recommend all Frank Sinatra listeners to listen the whole Cycles album at least once.