Following part about Frank Sinatra’s Death is from My Father’s Daughter by Tina Sinatra.

The new millenium was in sight.

Dad was determined to be a part of it. “How many more months?” he asked me.

Eighteen, I told him, rounding down a bit.

13 years ago, Barbara Sinatra was outside for dinner. Frank Sinatra’s situation suddenly got worse and he was taken to hospital at around 9pm. The doctors called Barbara immediately, and tried to save Sinatra for like 1,5 hour. Despite how long they tried, they couldn’t save him. In the end, at 10:50pm, Frank Sinatra died from a heart attack…

And at 11.10pm, Tina Sinatra was informed that her father had passed away. She called Nancy and in minutes they got to Cedars-Sinai Medical Center.

Tina Sinatra: “…My father lay facing us, eyes closed, hands over his chest; he lay on a lowered gurney, ready to be wheeled away. Barbara was seated in a chair to his left. We entered the cubicle without acknowledgment. I went directly to Dad and knelt beside him. “Oh, Poppa,” I said. At the sight of him my tears broke their dam. I wept freely, my forehead pressed against his upper arm. I looked for fear in his face, but saw none. His strain and torment were gone- in death he looked once more to be a figure of command. When i touched him, he was still warm. For an instant, I thought i was him move. I silently prayed for him. Oh God, take him and make him safe and warm, but keep him close to me. And to him: I am so sorry I was not here for you. I was filled with guilt and anger, but kept those feelings contained. I just kept saying to myself that I loved him, over and over again…”

In Sinatra family, Frank Sinatra’s death and the funeral arrangements were a total mess due to Barbara Sinatra. Sinatra’s children weren’t informed about Frank Sinatra’s Death neither when he was taken to hospital nor during the 80 minutes when doctors were trying to save him. No doubt Barbara ordered the doctors and hospital not to inform them.

In The Wee Small Hours, Moonlight In Vermont, Ave Maria and Put Your Dreams Away were played at the church and during the religious service during Frank Sinatra’s funeral, along with some other songs probably.

Here is a video of Tina’s, Frankie Jr’s and Nancy Sinatra’s comments on Put Your Dreams Away and how they explain the moment in the church during Frank Sinatra’s funeral.

Nancy Sinatra: When my dad died, it was the only choice when the question came up which song of Frank’s should be played at the end of the services and of course it had to be Put Your Dreams Away and there wasn’t a dry eye in the church because it’s that kind of an emotional song.

Francis Albert Sinatra was born in Hoboken (12th of December, 1915) and died at the age of 82 in Los Angeles, California. Frank Sinatra’s death was shock for everyone. His grave is at Desert Memorial Park in Cathedral City. He was buried with a pack of Camel cigarettes, a bottle of Jack Daniels, a zippo lighter and dimes. 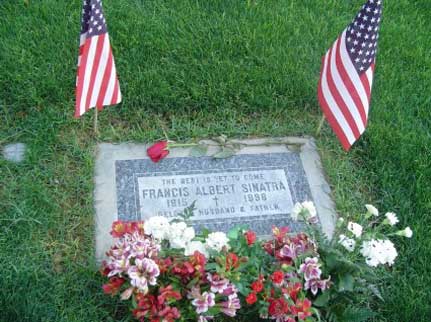 On the grave, it says “The Best Is Yet To Come”.